Tips Regarding Finding Accommodation in Chongqing/China

Our 3rd weekly contribution for GGII's newsletter and for people coming/living/working in Chongqing, is published with details as follows, please stay tuned for more coming next week.
To check further on GGII, click here.To subscribe to their newsletter, click here.To understand what services APA could offer, click here; for business inquiries, click here. 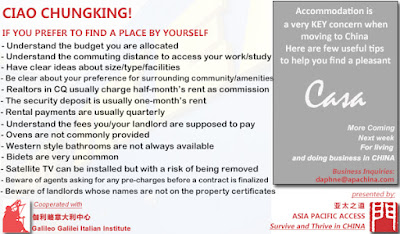 Our 2nd weekly contribution for GGII newsletter and for people coming/living/working in Chongqing, is published last week with details as follows, please stay tuned for more coming this and next week. 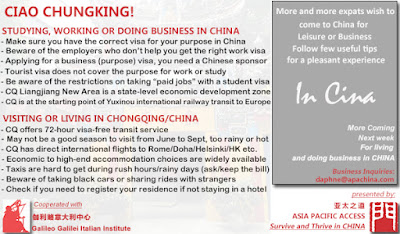 For the Italian Community in Chongqing or Coming to Chongqing

APA(Asia Pacific Access) starts a cooperation with GGII (Galileo Galilei Italian Institute) by contributing APA's knowledge for GGII's newsletter readers both in China and in Italy. The contribution will be offered weekly and monthly covering various areas that may appeal to people living, working or doing business in China.

GGII was officially established in Chongqing in Dec 9, 2007, and it's a cooperation between Chongqing University and Scuola Superiore Sant’Anna. It's financially supported by the Finmeccanica Holding Group - one of Italy’s largest enterprises, and Intesa Sanpaolo - the biggest banking group in Italy. In addition to its roles in academics and cultural promotion between China and Italy, it also helps provide information to foreign companies seeking new opportunities locally as well as Chinese companies seeking to enter the European market.

Our contribution to this week's newsletter is as follows, please stay tuned for more coming next week. 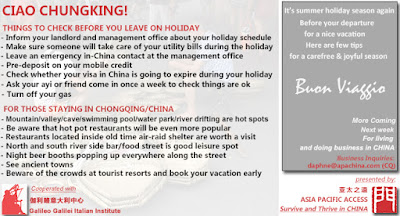 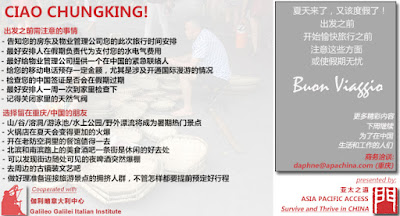 Living in a different social and cultural environment can become a fascinating life experience instead of an intimidating torment. Explore and interact with the local culture and society helps open a different mind and perspective for a more meaningful and rewarding expatriate experience. This program is designed to help the expatriate community better enjoy Chongqing and win the best out of it.
Yuzhong Peninsula is not only the current downtown area but also where Chongqing city had been built up upon and Chongqing people had been living originally in old times. Underneath its quite modern and international outlook at its busy commercial areas today, there are those historical stories/remains and ancient relics lying around the hidden streets/corners at  old Chongqing’s up city and bottom city areas waiting to be explored.

In this spicy and busy city, there are also places for nourishing one’s spirit and mind, no matter it’s ancient or modern art form.

To understand Chinese philosophy, Buddhism and Taoism are two main branches, and they also have temples in the city for you to have a taste of such spiritual pursuit.


Chongqing is a city of mountains, some parks/temples are also built as integrated with the mountains - a symbol of spiritual isolation.

Contact us for more details on this program for you or your assignees.
Posted by APA's Blog at 22:53 No comments:

If you are planning to visit Chongqing recently, you will be having the Plum Rain Season to welcome you here.

Plum rain is a typical climate phenomena at regions along mid and downstream Yangtze River, which usually comes as early as late May and goes as late as mid-July. During the Plum Rain Season, Chongqing city will always be covered with heavy grey clouds with continuous rains, day and night, big and small with only short and temporary un-raining days in between. The reason it’s called Plum Rain is because it’s a ripe season for sour-sweet plums, and it also has another name called Mold Rain (same pronunciation in Chinese) as the long raining days will usually bring along mold to your house, your furniture, your car and clothes and also humidity air inside your body causing damp-heat related diseases. Such a sun-lacking season affects people with the so-called Plum Rain Season Syndromes like lack of appetite, diarrhea, stomach sickness, somnolence, dysphoria and even depression. Please consult experienced TCM doctor or reliable TCM guidebooks for advice on some natural herbs, type of teas, vegetables and balanced diet for a healthy transition during this season. Outdoor hiking/walking for fresh air could also be quite helpful for stress and depression relief. There are nice parks in this big city, and ancient towns, temples, mountains in town and around the city suburbs (stay tuned for our later posts).

After the drowsy Plum Rain Season, you would be expecting the furnace heat and temperamental thunderstorms of the typical Chongqing summer. 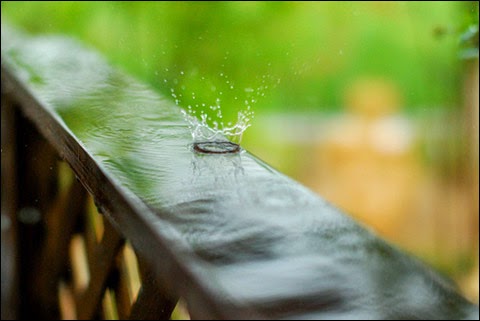 What is Chongqinger (Chongqing Ren)? Actually there aren't many original Chongqing locals existing in the current Chongqing population as ever since ancient times, it has been a city of migration (refer to the previous articles), yet living in the same city, they all start to share similar personalities.

As a city of mountains embraced with two rivers, one of which is China's mother river Yangtze River, its unique geographic features fostered unique climate and weather, and then a unique kind of people.

Perhaps the most common initial view on Chongqinger would be like, they talk too much, too loud, too fast and even too straight. Not just for you as an expat, even Chinese from eastern cities may also find them a bit crude and lack of some cultivation, some extremists even call them barbarians.

As a city surrounded by mountains and rivers inside Sichuan Basin, in old days it had never been easy for people from outside to get in or people from inside to get out. To get an impression of that, take a look at the magnificent Kuimen Gate at the Qutang Gorge when you are taking the Yangtze Three Gorges Cruise, also the long and plentiful lashes on the big rock alongside the river as that’s the historical remains of hardship of Qianfus- men who drag with bare hands and feet with long and thick rope tied to the boats to inner city riverside, and they usually had to be away from home for months to earn some money to support their family if they could stay alive in the end (do watch the Wulong show for that part of history). Even making a living in town is not that easy. Mr. Bang (as people start to call them today) or called Bangbang (mountain porter man) earns a hard living by selling physical labor on the steep mountain roads. For the migrants to Chongqing in ancient time for various reasons, and for those chose to enter Chongqing via land routes, they had also encountered challenges beyond imagination – limited ancient government courier routes, steep and scary mountain routes with hidden mountain thieves or mountain lords, hungry beasts, sickness etc. Families at that time didn’t choose to enter Sichuan/Chongqing could lose the record of their offspring who chose to enter forever. Of course, on the other hand, this land had also been favored by some litterateurs who sought for a hermit recluse romance from the less satisfying secular life.

In addition to the harsh natural and living environment, the furnace summer with steaming unbearable heat, the humid winter, the either continuous raining or continuous sunny days, and the quick transition between summer and winter, and from sunny to raining and vice versa, make people living here like to pursue strong favored spicy diet to help let the heat, humidity and sometimes the “frustration” inside the body out.

So people here tend to speak a bit louder, faster and straightforward, they are a bit quick-tempered, hot-tempered, and they do not like being fussy about things. A bottle of beer, and a little Longmenzhen (wild chat), you could even make a local friend with certain sincerity, as Chongqinger does like to chat whenever wherever however long they can. Perhaps they are not as shrewd as people from some eastern and more civilized cities, they tend to spend more time whenever possible on enjoying life instead of figuring how to make/save more money, so people used to call Sichuan/Chongqing land has a Kingdom of Heaven that you must go when you retire but never enter when you are still young, because it would be hard to leave the place once you reach there. And Chongqing men could also be good family men as most of them are Pa Er Duo which means husbands who are afraid of wives.

Well Chongqing ladies are regarded both naturally pretty and physically and mentally strong. The humid weather and mountain land nourishes their skin and cultivates their elegant physical shape. They are also strong women either in running families or businesses. Nowadays there are more successful female entrepreneurs in Chongqing in various industries.

If you get the chance to visit or relocate to Chongqing, do mingle around with the local people – they don’t usually bite, taste the local food, and walk the now a bit hidden mountain routes, perhaps you will be evolved into a Chongqinger sooner than you could even imagine.

Chongqing Hua (Chongqing Dialect) means the language spoken by Chongqing locals living in its main urban areas – there's a big differentiation between its other counties and regions; it belongs to Chengyu (Chengdu and Chongqing) branch of southwestern Mandarin, it represents one of the standard pronunciations in Sichuan Hua, and has more geographic application as compared to Chengdu Hua. As Chongqing has been a city of migrations from ancient times – the ratio of original Chongqing locals is no more than one third; the migration was mainly from Guangdong, Shanghai, Jiangsu and Anhui, and it had absorbed some of their pronunciations into its own language system. Due to the promotion of standard Mandarin, the original Chongqing Hua is spoken less and less by the younger generation.

Chongqing Hua is also called Chongqing Yanzi(er), which has very straight-forward meaning, is easy to follow, and actually many of its phrases are quite amusing.

APA's Blog
Asia Pacific Access (APA) is a China-based professional consultancy that capitalizes upon its immense knowledge base of working and living here to support individuals and corporations doing business in China. With over 20 years of experience and a team of dedicated professionals, APA provides personalized services to every client. APA has managed well over a thousand expatriate relocations to Beijing, Shanghai, Guangzhou and other cities in China. We have worked with blue-chip multinationals and many local companies on issues ranging from expatriate relocation, immigration services, domestic moves, policy consulting, remote site assessment, cross cultural training, and special projects.